Lead by Google, Android is a Linux kernel based operating system.

Learn Android with this most complete Android tutorial in a quick and easy way. Useful for beginners, this tutorial explains all the basic concepts with examples that you would need to gain confidence with Android programming.

Who is this Android Tutorial designed for?

This tutorial will be very useful for all beginners wanting to grow their skills in Android Programming. Freshers, BCA, BE, BTech, MCA, college students will also find it useful to develop notes, for exam preparation, lab exercises, assignments and viva questions. By the end of this tutorial you will have a good idea about Android and will be ready to move to a higher level.

Since Android Programming has its based in Java Programing, a fair knowledge of Java will help you quickly pick up Android.

Android syllabus covered in this tutorial

This is almost everything you would require to learn about Android at this level. So, let's get started!

Android is an operating system which is based on the Linux kernel. Android system is also called as Android Open Source Project (AOSP), lead by Google. Android is used for mobile devices, such as smart phones and tablet computers. The Android application makes life more comfortable and advanced for the users. 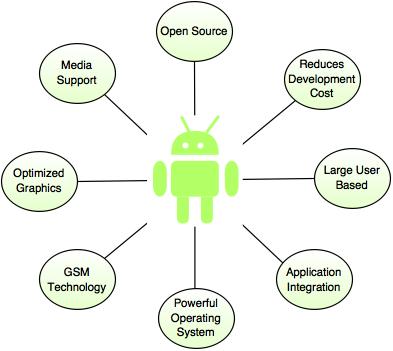 The above diagram shows some features of Android:

2. Implicit intent means sending a message to the Android system to find a suitable activity that can be responded to the intent.