Every concept of AI has been explained with examples here. The practical approach will make learning AI fun for you.

Who is this Artificial Intelligence Tutorial designed for?

This tutorial is designed for beginners in AI. Freshers, BCA, BE, BTech, MCA, all engineering and college students will find this tutorial extremely useful. Book mark the notes on this page for your exam preparation, lab exercises and viva questions.

This tutorial is designed to guide beginners, so you are expected to know the basics of computer world and how it is evolving.

AI Syllabus covered in this tutorial

That's pretty much everything that you would need to know to begin with AI. So let's begin with the tutorial!

AI is used in applicable in many aspects such as Finance, Medical, Transport, Entertainment, Pattern recognition, Data mining and many more. Some important applications of AI are listed below:

1. Gaming
AI plays an important role in designing strategic games such as chess, tic-tac-toe etc. These are the logical games in which the system can determine the various available options based on the information fed.

2. Natural Language Processing (NLP)
It is possible to interact with the computer that understands human language.

3. Expert System
Expert systems are developed to solve complex problems by the knowledge of reasoning, which is represented primarily using if–then rules rather than conventional procedural code.

4. Vision System
Computer Vision system is a technology of obtaining models to control information from visual data.
For example:
Police use computer software that can recognize the face of the criminal with the stored portrait made by forensic artist.

5. Robots
Robots are able to perform the tasks given by humans.

What is an Intelligent Agent?

Let's take an example of a car Driver agent given below.

1. Simple Reflex Agent
When the actions of nearest object are clearly visible then the response that has to be taken is by simple reflex agent.
For example: If the car is going ahead and a driver applies brake, then car following it should also initiate brake. 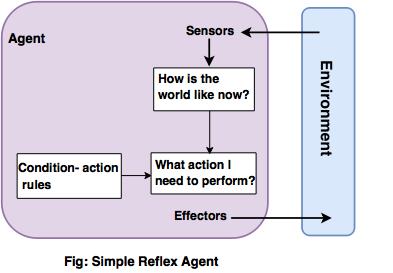 2. Goal based agentsFor example: The destination should be known to a taxi driver so that the available routes can be derived. 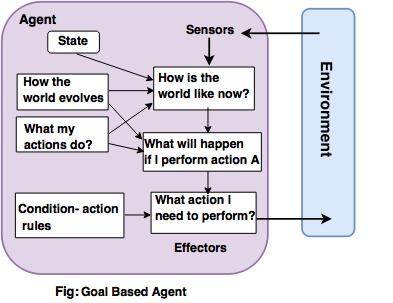 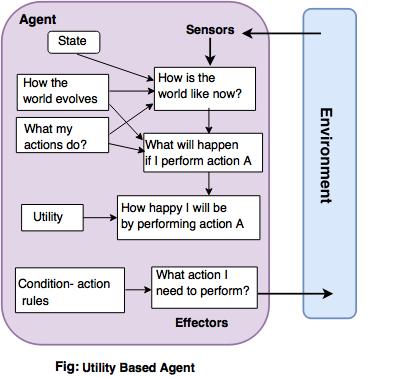 It is very difficult to know exactly where the environment ends and agent begins in many cases. Following are the properties that are very useful to predict the task of agent related to environment. They are: