The rich set of built-in functions and operators help in writing complex C programs, making it a robust language. Portability in C i.e. the ability of a C program to run on any system is another quality that makes people vouch on C.

Learn C with our interesting and complete C Programming tutorial. Starting from C basics, this tutorial will take you to advance topics like C Structures and C Files. Every concept of C programming language has been explained with examples and programs here. The practical approach will make learning C fun for you.

Who is this C Programming Tutorial designed for?

This tutorial is designed for beginners in C programming. Freshers, BCA, BE, BTech, MCA, all engineering and college students will find this C tutorial extremely useful. Book mark the notes on this page for your exam preparation, lab exercises and viva questions.

This C tutorial is designed to guide beginners, so all that you need is a basic understanding of computers and a lot of passion for C Programming!

C Syllabus covered in this tutorial

That's pretty much everything about C Programming Language, so let's begin with the tutorial!

Structure of a C program 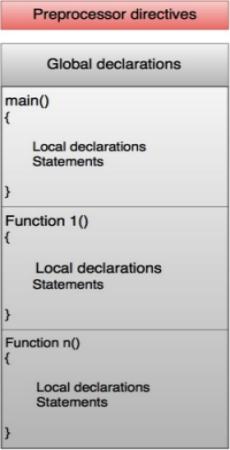 Preprocessor directives: They contain special instructions which indicate how the program is prepared for compilation. Common preprocessor command is 'include' that tells the compiler to execute a program where some information is required from the specified header file.

Global declaration: It is a variable/function which is declared after the preprocessor directives and before the main() function.