Linked list is a linear data structure. It is a collection of data elements, called nodes pointing to the next node by means of a pointer.

Linked list is used to create trees and graphs.

In linked list, each node consists of its own data and the address of the next node and forms a chain.

The above figure shows the sequence of linked list which contains data items connected together via links. It can be visualized as a chain of nodes, where every node points to the next node.

Linked list contains a link element called first and each link carries a data item. Entry point into the linked list is called the head of the list.

Link field is called next and each link is linked with its next link. Last link carries a link to null to mark the end of the list.

Note: Head is not a separate node but it is a reference to the first node. If the list is empty, the head is a null reference.

Linked list is a dynamic data structure. While accessing a particular item, start at the head and follow the references until you get that data item.

Linked list is used while dealing with an unknown number of objects:

In the above diagram, Linked list contains two fields - First field contains value and second field contains a link to the next node. The last node signifies the end of the list that means NULL.

The real life example of Linked List is that of Railway Carriage. It starts from engine and then the coaches follow. Coaches can traverse from one coach to other, if they connected to each other. 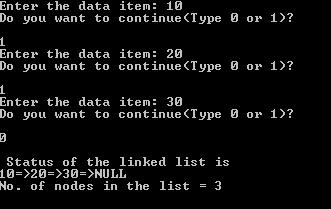 A node is declare as below:

The above code identifies the basic structure of declaring a node. Struct node contains an int data field and a pointer to another node can be defined as struct node* next.

Following are the operations that can be performed on a Linked List:

We can insert an element using three cases:

i. At the beginning of the list
ii. At a certain position (Middle)
iii. At the end

The above figure represents the example of create operation, where the next element (i.e 22) is added to the next node by using insert operation. 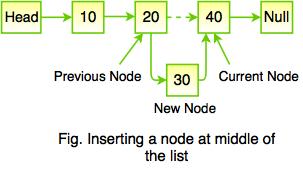 While inserting a node in middle of a linked list, it requires to find the current node. The dashed line represents the old node which points to new node.

iii. At the end 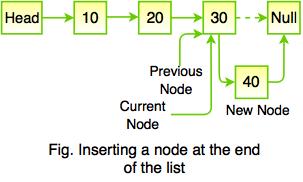 While inserting a node at the end of the list, it is achieved by comparing the element values.

We can delete an element using three cases:

ii. From the middle

Deleting a node from the middle requires the preceding node to skip over the node being removed.

The above figure shows the removal of node with x. It means that there is a need refer to the node before we can remove it.

iii. From the end

Deleting a node from the end requires that the preceding node becomes the new end of the list that points to nothing after it. The above figure shows removing the node with z.

The following code snippet represents traversing a node in a linked list: