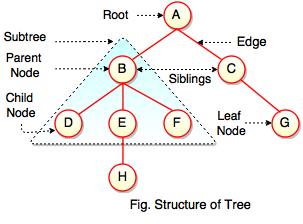 The above figure represents structure of a tree. Tree has 2 subtrees.
A is a parent of B and C.
B is called a child of A and also parent of D, E, F.

Tree is a collection of elements called Nodes, where each node can have arbitrary number of children.


In the above figure, D, F, H, G are leaves. B and C are siblings. Each node excluding a root is connected by a direct edge from exactly one other node
parent →  children.

Levels of a node 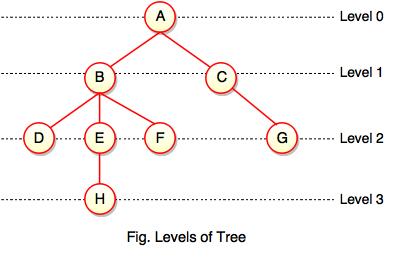 - If node has no children, it is called Leaves or External Nodes.

- Nodes which are not leaves, are called Internal Nodes. Internal nodes have at least one child.

- A tree can be empty with no nodes or a tree consists of one node called the Root.

Height of a Node 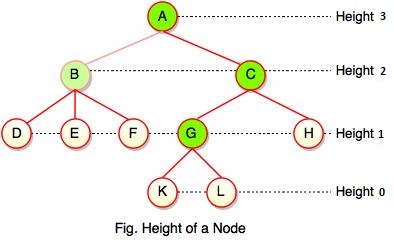 As we studied, height of a node is a number of edges on the longest path between that node and a leaf. Each node has height.

In the above figure, A, B, C, D can have height. Leaf cannot have height as there will be no path starting from a leaf. Node A's height is the number of edges of the path to K not to D. And its height is 3.

- Height of a node defines the longest path from the node to a leaf.

- Path can only be downward.

Depth of a Node

While talking about the height, it locates a node at bottom where for depth, it is located at top which is root level and therefore we call it depth of a node.

In the above figure, Node G's depth is 2. In depth of a node, we just count how many edges between the targeting node & the root and ignoring the directions.