What is User Interface?

There are three types of User Interfaces:

Why should think about User Interface?

There are following aspects which help to care or think about the user interface:

There are eight characteristics considered while making a good user interface design: 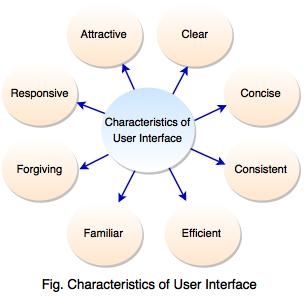 How does a GUI work? 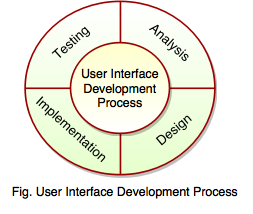 The above diagram shows the development process of user interface. It includes four phases:

Interface design defines a set of interface objects, actions and screen representations that enable a user to perform all defined tasks in a manner which meets every usability objective defined for the system.

II. User analysis identifies the user scenarios and understand the needs and expectations of users for each scenario.

III. Conceptual design models the underlying business that the application must support.

IV. Logical design processes the design and information flow of the application.

V. Physical design decides how the logical design will be implemented on specific physical platforms.

Testing determines the effectiveness of an UI application that must be tested and exposes how easy or difficult the UI is to use for the broadest possible audience.

1. Usability testing evaluates a product by studying how real users actually use the system. It provides significant payback only when it is well integrated into the entire project lifecycle.

User will interact only with the front end, look and the feel of the website or application. They don't think about the back end. The main purpose to engaged user when they visit particular website.

Following are the considerations or guidelines for a good user interface design: