Following are the reasons for the importance of software architecture.

1. A set of components such as database, computational modules which perform the function required by the system.
2. A set of connectors that allows the communication, coordination and cooperation between the components.
3. The constraints which define the integration of components to form the system.
4. Semantic model allows a designer to understand the overall properties of a system by using analysis of elements.

Representing the system in context 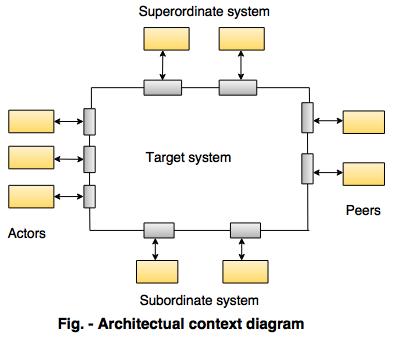 All the following entities communicates with the target system through the interface that is small rectangles shown in above figure.

Superordinate system
These system use the target system like a part of some higher-level processing scheme.

Peer-level system
These system interact on peer-to-peer basis means the information is consumed by the target system and the peers.

Actors
These are the entities like people, device which interact with the target system by consuming information that is mandatory for requisite processing.

ATAM was developed by the Software Engineering Institute (SEI) which started an iterative evaluation process for software architecture.

The design analysis activities which are executed iteratively that are as follows:

2. Obtained requirement, Constraints, description of the environment.
These types of information are found as a part of requirement engineering and is used to verify all the stakeholders are addressed properly.

Module view: This view is for the analysis of assignment work with the components and the degree in which abstraction or information hiding is achieved

Process view: This view is for the analysis of the software or system performance.

Data flow view: This view analyzes the level and check whether functional requirements are met to the architecture.