These Angular 4 questions have been designed for various interviews, competitive exams and entrance tests. We have covered questions on both basic and advanced concepts which will help you improve your skills to face interview questions on Angular 4.

Who is this Angular 4 interview questions designed for?

All the Web developers, Front End developers, UI/ UX developers and designers will find these questions extremely useful. All freshers, BCA, BE, BTech, MCA and college students wanting to make a career in front end designing will be highly benefitted by these questions.

There is no path breaking difference between angular 2 and angular 4. Angular 4 is simply the next version of Angular 2. The underlying concepts are same. If you know Angular 2, you can easily switch to Angular 4.

Angular 4 is backward compatible with Angular 2 for most Applications.

There are some under the hood changes to reduce the size of the AOT(Ahead-of-Time) compiler generated code. Migrating to Angular 4 may reduce production bundle.

Angular 4 is faster than Angular 2. The apps developed in Angular 4 are five times faster and smaller as compared to Angular 2.

TypeScript 2.1 and 2.2 compatiblity. Before Angular 4, only TypeScript 1.8 was supported. So with Angular 4, we have all new features of Typescript available.

Unlike Angular 2, the animations have been pulled out of @angular/core and are moved into their package in the Angular 4. If you don't use animations, this extra code will not end up in the production bundle.

We can now use new if/else style syntax with *ngif structural directive. In Angular 2, it was not possible to use "else" statement with nglf, but now it has been made possible in Angular 4.

Angular 4 has introduced a new titlecase pipe. It changes the first letter of each word into uppercase

The template tag is now deprecated: you should use the "ng-template" tag instead as Angular has its own template tag: ng-template now.

Starting from version 4, it is possible to use paramMap to get the route- and query-parameter from a related route. The use of Map brings advantages in terms of type security.

The old had an unsecure type (type params = {[key: string]: any}) and the value could have all possible types.

The new way provides either a string, or an array of strings related to the used method (paramMap.get(): string and paramMap.getAll(): string[])

In Angular 4, Animations are to be provided in the module BrowserAnimationsModule from @angular/platform-browser/animations. This avoids creating bundles with unnecessary large sizes.

We can now use new if/else style syntax with *ngif structural directive.

To build and produce components dynamically at runtime involved relatively much programming work. With the introduction of *ngComponentOutlet-Directive in Angular 4, it is possible to build dynamic components in a declarative way.

We have the support of most latest TypeScript versions in Angular 4 which helps in improving the speed of ngc-Compiler.

With Angular Universal, it is possible to render Angular applications on the web server. With that, websites can be optimized better for search engines as JavaScript is no longer necessary for initially rendering the page content.

3. What is the use of Interceptors?

Interceptors are used to intercept and/or mutate outgoing requests or incoming responses. It can be really useful for features like caching and logging.

Interceptors can be used on multiple scenarios, i.e. setting the Origin for each outgoing request, adding authentication token to every request etc.

Angular is a framework for building client applications in HTML, CSS and Javascript(or language like Typescript which compiles into Javascript).

It is basically a runtime environment for executing Javascript code outside the browser.

Browser don't understand TypeScript code, TypeScript compiles into JavaScript at the time when we build the application.

Angular applications are designed by composing HTML templates with Angularized markup, writing component classes to manage those templates, adding application logic in services, and boxing components and services in modules. 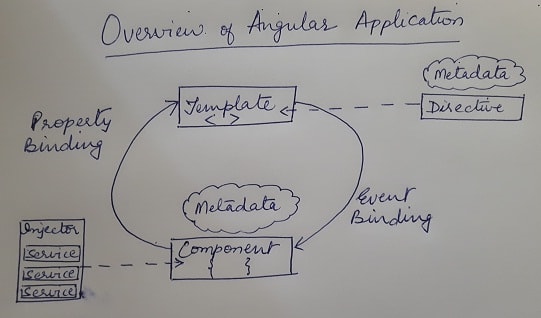 Components - Angular embraces component based architecture which allows us to work with smaller and maintainable piece of code that can be reused at several places. Each Angular App has one or more components. A component controls a patch of screen called a view. It encapsulates Data, HTML template and Logic for a view (area of the screen that the users see).

Every application has a root component that we call as App component.

Modules - It is container for group of related components, i.e. in an employee module, we can have components for displaying employees details. Every Angular app has at least one NgModule class, the root module, conventionally named AppModule.

Templates - You define a component's view with its companion template. A template is a form of HTML that tells Angular how to render the component.

Metadata - Metadata tells Angular how to process a class.

In fact, CourseListComponent really is just a class. It's not a component until you tell Angular about it.

To tell Angular that CourseListComponent is a component, attach metadata to the class.

In TypeScript, you attach metadata by using a decorator. Here's some metadata for CourseListComponent:

Of course, you can also write your own directives. Components such as HeroListComponent are one kind of custom directive.

Services - A service is typically a class with a narrow, well-defined purpose. Components are big consumers of services. Component classes should be lean. They don't fetch data from the server, validate user input, or log directly to the console. They delegate such tasks to services. A component's job is to enable the user experience and nothing more. It mediates between the view (rendered by the template) and the application logic.

Angular factor your application logic into services and make those services available to components through dependency injection.